Archive for the ‘Math Humor’ Category.

Grigori Perelman’s theorem: There is no offer you can’t refuse.

A conversation between two Russians:
— Run to the store and fetch a couple bottles of vodka.
— How much is a couple?
— Seven.

— Is it true that the Windows operating system was copied from a UFO computer that crashed in Roswell?
— All we know for sure is that the UFO that didn’t crash had a different operating system.

I saw our system administrator’s shopping list. The first line was tomatoes.zip for ketchup.

Right clicking a file with a mouse will allow you to change it, check it for viruses, or revert to the previous version. I wonder where I can buy a mouse that can do the same thing with my husband.

Attention! We want to check that you are not a robot. Please, undress and turn on a web-camera.

In a drug store:
— I would like input and output cleaners.
— ???
— Toothpaste and toilet paper.

— Tonight my parents are away. Let’s finally try a forbidden thing.
— Dividing by zero?

A Visit to Smullyan 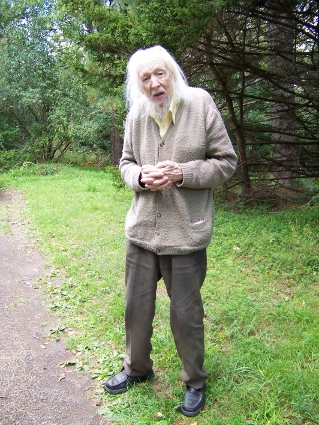 I visited Raymond Smullyan on my way home from Penn State. We went for lunch at Selena’s Diner. What do two mathematicians do during lunch? Exchange magic tricks and jokes, of course. Here is a story Raymond told me:

Raymond: What is the date?
Stranger: I do not know.
Raymond: But you have a newspaper in your pocket!
Stranger: It’s no use. It’s yesterday’s.

Nerdy Jokes from the Russian Web

Engraved on a mathematician’s tombstone: “Q.E.D.”

—You act very brave on the Internet. But could you repeat this looking into my eyes?
—Sure. Send me your picture.

Teacher: “How much do we get if we cut eight into two halves?”
Student: “Two threes, if we cut vertically; and two zeros, if we cut horizontally.” 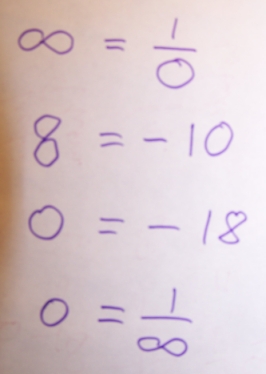 I found a strange piece of paper in an old pile. I believe that it is a visual proof of the following statement:

Nerdy Jokes from the Web

Decimals have a point.

During the show “Are You Smarter Than a 5th Grader?” the following question was asked:

What is superfluous in the following list: a carrot, an onion, a potato, a Lexus?

A smart 5th grader answered: a carrot, an onion, and a potato.

If you buy 3 DVDs for the price of 4, you will get one more as a bonus.

Only yesterday, today was tomorrow.

By definition, one divided by zero is undefined.

Finally artificial intelligence has caught up with humans: when filling out electronic forms, many humans need several tries to prove they are not robots.

Be back in 5 minutes. If I am late, reread this sms.

Jokes from the Web

— If a black cat crosses in front of you and then crosses back, what does it mean? Is your bad luck doubled or canceled?
— Is this a scalar or a vector cat?
— Huh?
— A scalar cat doubles and a vector cat cancels.

Unbuttered bread, unable to cause the usual harm, tries to fall on the dirtiest spot.

Chance is a design carefully planned by someone else.

Wikipedia: I know everything.
Google: I can find anything.
Facebook: I know everyone.
Internet: You are nothing without me.
Electricity: Shut up, jerks.

Yesterday I bought pills to increase my IQ. Couldn’t open the jar.

Today I opened my desktop’s case and finally understood whither my trash is emptied.

— I’ve noticed that fools are always sure of themselves, while clever people are doubtful.
— No doubt.

— What happened to your girlfriend, that really cute math student?
— She’s no longer my girlfriend. I caught her cheating on me.
— I don’t believe that she cheated on you!
— Well, a couple of nights ago I called her, and she told me that she was in bed wrestling with three unknowns.

A programmer calls the library:
— Can I talk to Kate please?
— She’s in the archive.
— Can you unzip her?

To protect the population from airplane disasters, Congress has ratified an addendum to the law of gravity.

— Your computer is such a mess.
— It got a nasty virus.
— And it poured coffee on your keyboard?

After little Tom learned to count, his father had to start dividing dumplings evenly.

In spite of the crisis, inflation, and erratic fluctuations of the market, Russian mathematicians promised the president to keep number Pi between 3 and 4 until at least the end of the year.

A logician rides an elevator. The door opens and someone asks:
— Are you going up or down?
— Yes.

Logic: if an empty yogurt container is in the sink, a spoon is in the garbage can.

Logically, a wireless mouse should be called a hamster.

— I started a new life today.
— You quit smoking and drinking?
— No, I changed my email and Facebook accounts.

— The reviewer has rejected your paper submitted to our math journal because it doesn’t contain any theorems or fomulae or even numbers.
— Wait a minute. Your reviewer is mistaken. There are page numbers on every page.

A kyboard for sal: only on ky dosn’t work.

My computer always beats me in chess. In revenge, I always beat it in a boxing match.

Two programmers are talking:
— I can’t turn on my oven.
— What’s the error message?