Archive for the ‘My Career and Personal Life’ Category.

A familect is a portmanteau word formed by squashing together two words: family and dialect. It means words that a family uses that are not a part of a standard vocabulary. This story is about two words that my son Sergei invented, and twenty years later, my family still uses them.

As you might know, I was married three times, and I have two sons, from two different fathers. These fathers were also married several times and had other children. My two sons are half-brothers, and they also have half-siblings through their fathers. Thus a half-sister of a half-brother became a quarter-sister. Inventing this term was quite logical for a son of two mathematicians.

As you can imagine, our family tree is complicated. One day Sergei pointed out that our tree doesn’t look like a standard tree and called it a family bush.

I spend a lot of time working on my blog, and I used to think it would be nice to get some money out of it.

Years ago I got two emails from different ad agencies at the same time. They wanted to place ads at particular essays for $50 a year. I decided to give them a try.

My first correspondent wanted a link on my “Does Alcohol in Teens Lead to Adult Woes?” essay, connecting to a website offering help to alcoholics. I agreed. But when I read the actual text, I couldn’t stop laughing. The text they wanted to use was, “Many studies have already claimed that teenage alcoholism could lead to more problems later in life.” How ironic! This ad would follow my essay explaining that one of the studies is completely bogus. I rejected them.

The second agency wanted an ad accompanying the essay “Subtraction Problems, Russian Style.” I placed it. They wrote to me (and I reproduce it with all of their errors intact):

I really appreciate your efforts on this. As I checked the text link, I have seen that the text link has been label as “Sponsor ad”. Kindly omit or delete the word “Sponor ad:” or you may changed it to “Recommended site or Relevant Site” but I would love to prefer the text link be seen as natural meaning no labeled inserted on it.

They wanted me to pretend that I recommend their product. I was naive enough to think that I was selling space on my page, but what they really wanted was for me to lie that I like their product.

Before this experiment, I hoped to find some honest ads for my blog. After this experiment, I realized how much stupidity and falsehood are involved. Since then, I ignore all offers of ads that come my way. That’s why my blog is ad-free.

I grew up in the USSR, where I was clueless about the race issues in the US. I have now lived in the US for 30 years, and still feel that there are many things about race that I do not understand. As a result, I am afraid to speak about it. I am worried that I’ll say something wrong. Recent events have encouraged me to say something. This is my first piece about race.

I came back to mathematics 10 year ago and started working at MIT. I love it. With some exceptions.

Many mathematicians are introverts or snobs or gender-biased. They are not usually friendly. I often walk down a corridor and people who are coming towards don’t notice me. If I say hello, they might not even reply or raise their eyes. It could be they are thinking about their next great theorem and do not notice me. It could be that I am not faculty and therefore do not deserve their attention. It could be that as a women I am not worth of their hello.

Soon after I started working at MIT, I was reminded of one of the reasons I left academia. It was this unfriendliness. But this time was different. First, I had grown a thicker skin. Second, I was working within a group. People who were working with me were nice to me. It was enough and so I stayed.

With time I adopted the same style: passing people without saying `Hello.’ Mostly I got tired of people not replying to my hello.

One day I was passing this man who, as had happened many times before, purposefully didn’t look at me. I thought my usual thought: another introverted/snobbish/gender-biased mathematician. Then I suddenly stopped in my tracks. My logic was wrong. This guy was Black. The unfriendliness of mathematicians is surely way worse for him than for me. It could be that he is looking at the floor for the same reason I do it: he is afraid that people will ignore his greeting. I failed to think about race deep enough before this realization. What happened next should have happened years earlier.

I took the initiative and the next couple of times I saw him, I said hello. This was all it took—two hellos—to change the whole feeling between us. The guy has a great smile.

Category: My Career and Personal Life, Women and Math  |  5 Comments

How Old is Everyone?

My friend Alice reminds me of me: she has two sons and she is never straight with her age. Or, maybe, she just isn’t very good with numbers.

Once I visited her family for dinner and asked her point blank, “How old are you?” Here is the rest of the conversation:

How old is everyone?

When I was in grade school, one of the teachers called me Cave Lioness. She hated my unruly hair, which reminded her of a lion’s mane. This teacher was obviously very uninformed, for female lions do not have manes.

This name calling had the opposite to the desired effect. I became proud of my mane and didn’t ever want to cut it. When I grew older, I opted for convenience and started to cut my hair short&mdahs;sometimes very short.

Last year I was too busy for barbers, and my hair grew more than I intended. As it turned into a mane, I remembered the story of this nickname.

Once I was giving a math lecture and my phone, which I’ve never quite understood, was on the desk in front of me. Suddenly it rang. I didn’t pick it up, as I proceeded with my lecture. The ringing stopped, while I was explaining a particularly interesting mathematical point. After a minute, my phone said, “I do not understand a word you are saying.”

I already wrote about my first experience crocheting hyperbolic surfaces. In my first surface I added two more stitches per current stitch. It took me hours to crochet the last row: the same hours it took me to crochet the rest.

For my next project, I reduced the ratio. The light blue thingy has ratio 3/2. I continued making my life simpler. The next project, the purple surface on the left, has ratio 4/3. The last project on the right has a ratio of 5/4 and is my favorite. Mostly because I am lazy and it was the fastest to make.

Category: Math in Life, My Career and Personal Life  |  3 Comments

I just got this picture from my friend Victor Gutenmacher, which I never saw before. My 1975 IMO team is posing at our training grounds before the Olympiad trip to Bulgaria.

There are two more adults in the picture: Valentin Anatolievich Skvortsov, our leader and Zoya Ivanovna Moiseyeva, our deputy leader. Skvortsov was working at the math department of Moscow State University at that time. The University was angry that he didn’t block some students with Jewish heritage from the team thus allowing them to be accepted to Moscow State University without exams. I wrote a story of how Zoya persuaded Alexander Reznikov not to go to Moscow University to help Valentin. It ruined Alexander’s live, and didn’t even help Valentin. 1975 was Valentin’s last trip as the leader. 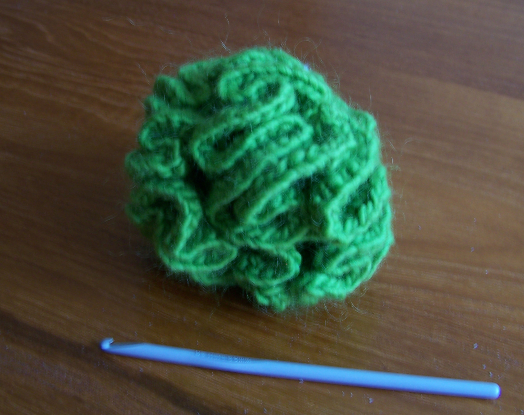 I chose a ratio of 2 to 1, adding two new stitches for each previous stitch. With this ratio, my flattish surface started looking like a ball very fast. The length of the perimeter doubled for every row. Thus each new row I crocheted took the same total amount of time that I had already spent on the whole thing. All the hours I worked on this “brain,” I kept thinking: darn, it is so unrewarding to do this. Annoying as it was, the thing that kept me going was my initial decision to continue to use up all the yarn Debbie had given me. In the end, with this ratio, half the time I worked was spent making the final row.Share:

I am on TEDEd

A cartoon based on my script is posted on TEDEd: Can you solve the Leonardo da Vinci riddle?.Share: