I’m not kidding; there is such a paper. It is titled, “A Headache-causing Problem” and its authors are Conway (J.H.), Paterson (M.S.), and Moscow (U.S.S.R.). The acknowledgements in the paper shed some light on how Moscow became a mathematician:

[The next part was meant to be on the following page, Conway told me, but the editor missed the humor and just continued the sentence…]

Even though I lived there for 30 years, I had no idea that Moscow had a talent for math. Of course, this talent only emerged when Moscow was more than 800 years old. 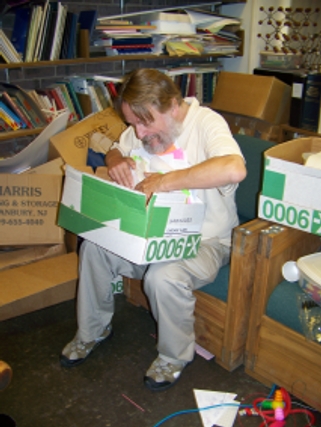 This wonderful paper by Moscow was very difficult to find. It was presented to Hendrik W. Lenstra on the occasion of his doctoral examination. It was published in 1977 in a book titled “Een pak met een korte broek,” which in Dutch means, “A Book in Short Trousers.”

I tried to find it on the Internet — it wasn’t there. I asked John Conway — it took him quite some time to find it. Here is the picture of John Conway searching for a headache-causing problem. Luckily for you and me, he found it. To save you from another headache, I am uploading the scan of it in pdf format here: A Headache-causing Problem by J.H. Conway, M.S. Paterson, and U.S.S.R. Moscow.

I hope that Moscow will not start complaining that I never asked its permission to post the paper. Some might argue that Moscow, U.S.S.R., doesn’t exist anymore, but I would counter that it exists, but with a changed name. If Moscow tries to sue me, I hope it’s not because it is still bitter that I left it behind in 1990.

Hey Moscow, it’s time we were friends again. Would you like to co-author a paper with me?