Who Should Have Kissed Whom 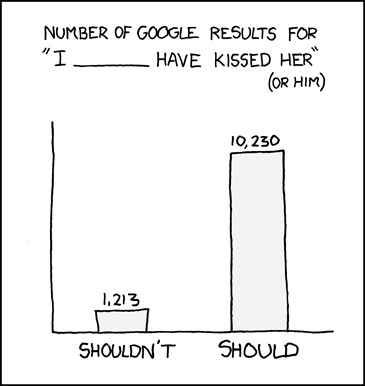 I recently updated my collection of my favorite xkcd webcomics.

Today I would like to discuss the comic entitled “Regrets”. When I saw this comic, the first thing I did was go to Google to check the numbers. All my numbers were taken on September 9, 2008 at around 3:00 p.m.

Here are the Google hit counts:

The numbers are slightly different than those in the cartoon, but the idea is the same; we regret we didn’t kiss. Does it mean that if you want to kiss someone you should go ahead, or otherwise you would contribute to this pile of regrets? The answer is coming later, but first, let’s see what happens if we change gender:

The same story overall, but for some reason, there are fewer reports by people who either tried or didn’t try to kiss HIM. Is kissing him less interesting or important? Most probably we still expect men to take the initiative in kissing her.

Then I checked the genderless case:

Wow. Looks like we really should start kissing each other. Right? But wait. Let’s check the point of view of a kissee, rather than a kisser:

We see a completely different picture. It is easy to explain why the numbers are smaller: passive people would be less likely to discuss their feelings. But, even so, they claim that they preferred not to be kissed. Maybe it is OK that people mostly regret that they didn’t kiss. After all, if they had tried to kiss, they might not have been greeted with enthusiasm. This leaves you with a choice between your own regrets that you should have kissed and his/her regrets after you did.

I did regret that I hadn’t kissed you, but I so much prefer that I regret not kissing you than you regret being kissed by me. This small research made me feel better. I will not continue regretting any more.