My Last Visit with John Conway

John Conway came to the 2017 MOVES conference and told me that he wanted to talk to me about subprime fibs. The subprime Fibonacci sequence was invented by John Conway, and I wrote a paper about it. The paper, Conway’s Subprime Fibonacci Sequences, wasn’t written with John, but rather with Richard Guy and Julian Salazar, and is published in Mathematics Magazine.

I wanted to visit my friend Julia, who lives in Princeton, and this was a good opportunity to discuss the mysteries of subprime fibs with John. On my second day in Princeton, I came to the math department around 3:00 pm carrying some apples. John never goes out for lunch, as he has trouble walking, so he is always hungry by the end of his work day. Thus, each time I go visit him, I come with food. We have very different tastes in apples: unlike me, he likes his apples unwashed.

Anyway, by the time I arrived to the department, John had already left. This was somewhat unusual, so I called him. He sounded weird and not very coherent, as if he wasn’t feeling well. Considering also that he had left early, I started to worry. Unfortunately, there was a lot of background noise during our conversation and I only understood that he was at a pizza place. John walks very slowly, so he couldn’t have gone too far away from campus. I found him in the second pizza place I checked. It was Tiger’s Pizza. He told me that he felt very sleepy and tired. However, I was gratified to see how much having an interested listener gave him energy. He started telling me stories of his trip to Germany a long time ago. He had already eaten, but decided to have some more fries. As a perfect gentleman he offered me some, but I didn’t want any.

At some point he dropped a couple of fries on the floor. He tried to reach them and I jumped to help. That was a mistake. I actually know that he likes proving to me and to himself that he can do stuff independently. He accepts my help when I am subtle about it, or when it is unavoidable. Anyway, he looked at me angrily and I backed off. He picked up his fries from the floor and ate them. 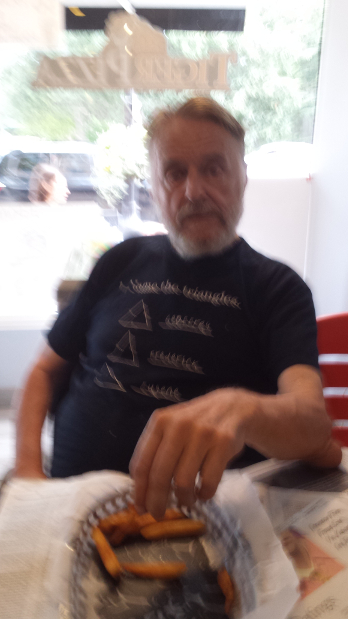 I liked his T-shirt and tried to take a picture of it. As you can see, I am no photographer. The T-shirt shows a test question: Name the triangles. Then it features three triangles: an equilateral, isosceles, and right. It also provides someone’s answers to this naming test: Geoffrey, Frederick, Eugene.

John asked me if I am more scared of Donald Trump or Kim Jong Un. We agreed that Trump is scarier. At this time he seemed his usual self.

I offered John a ride home, as I do whenever I visit him. He was very glad as he felt very tired. He started to get up. This time, I remembered not to try to help. He couldn’t get up, I waited. He tried to push his weight off the table top, but the table was wobbly. I leaned on the table, as if to rest. We often play this sort of game in which he welcomes my help as long as we both pretend that I’m not helping.

My car was a block away and he wanted to walk the block. But after making two steps out of the pizzeria he changed his mind and asked me to bring the car to him. This was the first time ever. This visit he was so much worse than ever before.

On the drive to his place, he gave me a puzzle:

John’s puzzle. Given a Mebius strip with a hole, how do you embed it in 3-D so that the two circular borders of the surface are equivalent?

I dropped him off at his house and offered to walk him to the door. He refused. I sat in my car and watched him walking very slowly along his path. I had this sinking feeling in my gut that I was seeing John for the last time. I drove away, once he disappeared behind his door.

On my way back to Boston I visited my friend Vitaly in East Brunswick, and the next day my high school friend Olga in Edison. In Edison, my car started beeping and I panicked. I was far away from home, and didn’t want to be stuck in NJ. I started to look for the source of the sound. It was John’s phone. As always, my gut feeling deceived me: I had to go back to Princeton.

I drove back to John’s apartment. His door was unlocked and I entered. He was resting in bed. He was greatly annoyed at being disturbed. I explained the reason, and gave him his phone. He took the phone and said, “Off you go.” I had this sinking feeling in my gut that these words would be the last words that I would hear from John.