My Last Visit to Smullyan 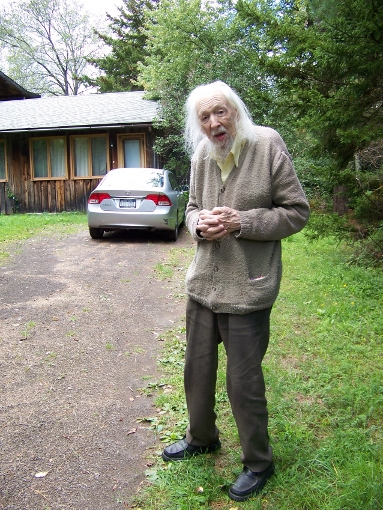 I already posted a funny true story that Smullyan told me when I last visited him. Raymond Smullyan died recently at the age of 97 and my mind keeps coming back to this last visit.

The year was 2012 and I was about to drive back to Boston after my talk at Penn State. Smullyan’s place in the Catskills was on the way—sort of. I wanted to call him, but I was apprehensive. Raymond Smullyan had a webpage on which his email was invisible. You could find his email address by looking at the source file or by highlighting empty space at the bottom of the page. Making your contact information invisible sends a mixed message.

While this was a little eccentric, it meant that only people who were smart enough to find it, could access his email address. I already knew his email because he had given it to me along with his witty reply to my blog post about our meeting at the Gathering for Gardner in 2010.

In our personal interactions, he always seemed to like me, so I called Raymond and arranged a visit for the next day around lunch time. When I knocked on his door, no one answered, but the door was open, and since Smullyan was expecting me, I walked right in. “Hello? Anyone there? Hello? Hello?” As I wandered around the house, I saw an open bedroom door and inside Smullyan was sleeping. So I sat down in his library and picked up a book.

When he woke up, he was happy to see me, and he was hungry. He told me that he didn’t eat at home, so we should go out together for lunch. I was hungry too, so I happily agreed. Then he said that he wanted to drive. I do not have a poker face, so he saw the fear in me. My only other trip with a nonagenarian driver flashed in front of my eyes. The driver had been Roman Totenberg and it had been the scariest drive I have ever experienced.

I said that I wanted to drive myself. Annoyed, Raymond asked me if I was afraid of him taking the wheel. I told him that I have severe motion sickness and always prefer to drive myself. Raymond could see that I was telling the truth. I got the impression that he was actually relieved when he agreed to go in my car.

We went to Selena’s Diner. He took out playing cards with which he showed me magic tricks. I showed him some tricks too. This was probably a bad move as he abandoned me to go to the neighboring table to show his magic tricks to a couple of young girls. They were horrified at first”his unruly hair, his over-the-top energy, his ebullient behavior”but between me and the waitress, we quickly reassured them. The girls enjoyed the tricks, and I enjoyed my visit.