How Well Do You Know Your Dice?

Each time I see John Conway he teaches me something new. At the Gathering for Gardner he decided to quiz me on how well I know a regular six-sided die. I said with some pride that the opposite sides sum up to 7. He said, “This is the first level of knowledge.” So much for my pride. I immediately realized that the next level would be to know how all the numbers are located relative to each other. I vaguely remembered that in the corner where 1, 2, and 3 meet, the numbers 1, 2, and 3 are arranged in counter-clockwise order.

Here’s how John taught me to remember every corner. There are two types of corners. In the first type numbers form an arithmetic progression. John calls such numbers counters. He chose that name so that it would be easy to remember that counters are arranged in counter-clockwise order. The other numbers he calls chaos: their increasing sequence goes clockwise.

Once I grasped that, I relaxed thinking that now I know dice. “What about the third level?” he asked. “What third level?” “Now that you know which number goes on which side, you need to know how the dots are arranged.” Luckily, there are only three sides on which the dots are not placed with rotational symmetry: 2, 3, and 6. And they all meet in a corner, which John calls the home corner. The rule is that the diagonals formed by the dots on the sides with 2, 3, and 6, meet in the home corner. You might argue that 6 doesn’t have a diagonal. But if you look at 6, you can always connect the dots to form the letters N or Z, depending on the orientation of the die. When you lay the letter N on its side, it becomes the letter Z. Thus they define the same diagonal. This diagonal has to meet the diagonals from 2 and 3 in the corner.

When I came home from the conference I picked up a die and checked that the rules work. There are 8 corners. It is enough to remember one corner of numbers to recover the other numbers by using the opposite sum rule. But it is nice to have a simple rule that allows us to bypass the calculation. Four of the corners have numbers in arithmetic progression: 1:2:3, 1:3:5, 2:4:6, and 4:5:6. They are counters and they are arranged counter-clockwise. The other four corners are: 1:2:4, 1:4:5, 2:3:6, and 3:5:6, and they are arranged clockwise.

I wanted to provide a picture of a die for this post and went online to see if I could grab one. Many of the graphic images of dice, as opposed to photographs, were arranged incorrectly. Clearly these visual artists did not study dice with John Conway.

Then I decided to check my own collection of dice. Most of them are correct. The ones that are incorrect look less professional. Here is the picture. The ones on the right are correct. 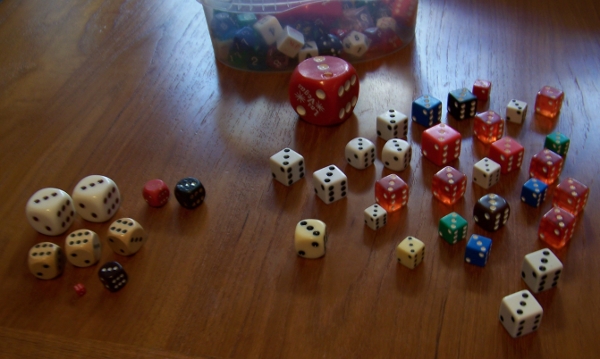