Cambridge Waldo puzzle from the 2013 MIT Mystery Hunt was supposed to be easy. Its goal was to get people out of the building for some fresh air. I made this puzzle jointly with Ben Buchwald, Adam (Pesto) Hesterberg, Yuri Lin, Eric Mannes and Casey McNamara. The puzzle consists of 50 pictures of different locations in Cambridge; one of the above individuals was hiding in each picture. Let me use this opportunity to thank my friends for starring in my puzzle and being inventive while doing it.

The puzzle starts with a group picture of my stars. The caption to the picture gives their names. The fact that they are standing in alphabetical order is a clue.

Out of the 50 pictures, each person appears in exactly ten pictures. If you mark the locations of one person on a map, they look like a letter. For example, below are Ben’s locations that form a letter “S”. When you put the letters in the alphabetical order by people names you get the answer to the puzzle: SCAMP.

It was difficult to hide people, especially when there were no other people around. So we sometimes used props. We only used one prop per person. Here you can see Pesto with his sarongs in plain view. In the other picture (below) he is hiding under a white sarong. Yuri had a bicycle helmet. In one of the pictures, she hid so well that you couldn’t see her — but you could see her helmet. Ben had a bear hat. In one of the pictures you can only see a shadow of a person, but this person was clearly wearing a hat with bear ears. Eric didn’t have a prop, but my car was eager to make a cameo appearance at the Mystery Hunt, so I hid him in my car in one of the pictures. 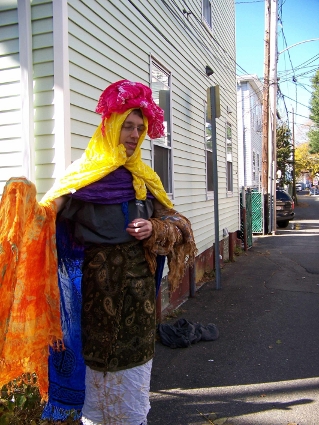 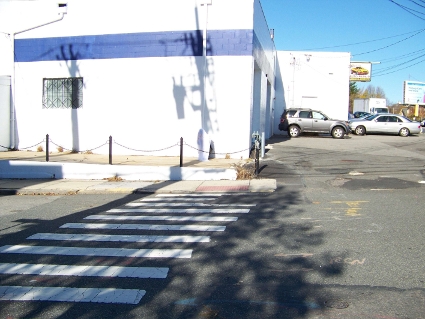 As you might guess I made the pictures of different people at different times. So Ben Buchwald was the one who realized that solvers might differentiate people by looking at the data of the picture files. He carefully removed the original time stamps.

Despite our best intentions, our test-solvers decided not to leave their comfy chairs, but rather to use Google-StreetView. We strategically made some of the pictures not Google-StreetViewable, but our test-solvers still didn’t leave the comfort of their chairs. They just became more inventive. I do not know all the things they did to solve the puzzle, but I heard about the following methods:

I have yet to understand why this puzzle was difficult for the Mystery Hunt teams.