I found a new Russian Olympiad for high schools related to universities. I translated my favorite problems from last year’s final round. These are the math problems:

8th grade. In a certain family everyone likes their coffee with milk. At breakfast everyone had a full cup of coffee. Given that Alex consumed a quarter of all consumed milk and one sixth of all coffee, how many people are there in the family?

I liked the physics problems even more:

8th grade. Winnie-the-Pooh weighs 1 kg. He hangs in the air with density 1.2kg/m3 next to a bee hive. He is holding a rope connected to a balloon. Estimate the smallest possible diameter of the balloon, assuming that this happens on Earth. 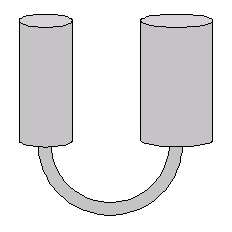 10th grade. Two containers shaped like vertical cylinders are connected by a pipe underneath them. Their heights are the same and they are on the same level. The cross-sectional area of the right container is twice bigger than the left’s. The containers are partially filled with water of room temperature. Someone put ice into both containers: three times more ice into the right one than into the left one. After that, the containers are closed hermetically. How will the water level will change after the ice melts completely: