Why Are We Losing Female Mathematicians? 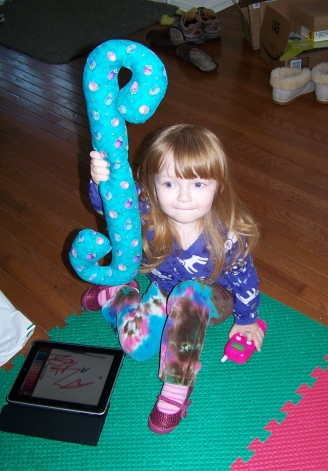 The data from annual surveys carried out by the American Mathematical Society shows the same picture year after year: the percentage of females in different categories decreases as the category level rises. For example, here is the data for 2006:

The high percentage of female math majors means that a lot of women do like mathematics. Why aren’t women becoming professors of mathematics? In the picture to the left, little Sanya fearlessly took her first integral. I hope, even as an adult, she will never be afraid of integrals.

I am one of the organizers of the Women and Mathematics Program at the Institute for Advanced Study at Princeton In 2009 we had a special seminar devoted to discussing this issue. Here is the report of our discussion based on the notes that Rajaa Al Talli took during the meeting.

Many of us felt, for the following three reasons, that the data doesn’t represent the full picture.

First, the different stages correspond to women of different ages; thus, the number of tenured faculty should be compared, not to the number of current math majors, but rather to women who majored in math many years ago. The percentage of female PhDs in mathematics has been increasing steadily for the past several years. As a result, we expect an eventual increase in the number of full-time female faculty.

Second, international women mathematicians might be having a great impact on the numbers. Let’s examine a hypothetical situation. If many female professors come to the US after completing their studies in other countries, it would be logical to assume that they would raise the numbers. But since the numbers are falling, we might be losing more females than we think. Or, it could be the opposite: international graduate students complete a PhD in mathematics in the USA and then go back to their own countries. In this case we would be losing fewer females to professorships than the numbers seem to suggest. Unfortunately, we can’t really say which case is true as we do not know the data on international students and professors.

Third, many women who major in mathematics also have second majors. For example, the women who have a second major in education probably plan to become teachers instead of pursuing an academic career. It would be interesting to find the data comparing women who never meant to have careers in science with those women who left because they were discouraged. If we are losing women from the sciences because they decide not to pursue scientific careers, then at least that is their choice.

It is also worth studying why so few women are interested in careers in mathematics in the first place. Changing our culture or applying peer pressure in a different direction might change the ambitions of a lot of people.

We discussed why the data in the table doesn’t represent the full picture. On the other hand, there are many reasons why women who can do mathematics and want to do mathematics might be discouraged from pursuing an academic career:

Our group proposed many solutions to help retain women in mathematics:

At the end of our meeting, everyone accepted Ingrid Daubechies‘ proposal that we do the following:

Each woman in mathematics should take as her responsibility the improvement of the mathematical environment in which she works. If every woman helps change what’s going on in her university or the school where she teaches, that will help solve the problem on the larger scale.