Tired of the same old sudoku? Here’s an opportunity to try many variations of it. Thomas Snyder and Wei-Hwa Huang wrote a book called Mutant Sudoku

. The authors are both Sudoku champions. I like the book because the authors are trying to bring everyone up to their level, rather than dumbing down their puzzles. So the book is not at all boring as are most Sudoku books.

The book contains about 180 fun puzzles. Look at the variety:

Wei-Hwa Huang kindly sent me this sample Thermo Sudoku puzzle from the book to use on my blog. The grey areas represent thermometers. Every particular thermometer has to have numbers in increasing order (not necessarily consecutive) starting from the bulb. 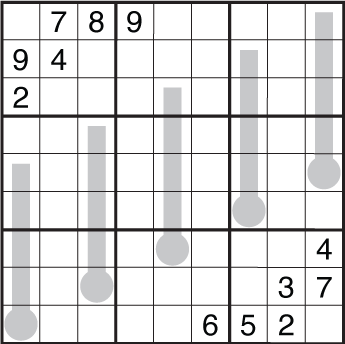 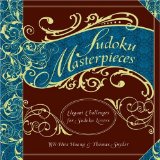 , is itself a masterpiece. With about 100 puzzles, there are fewer than in the first book, but there are more types of puzzles. As a consequence, you’ll have less practice for each particular type, but more variety. In addition, as you can see from the cover, the second book is elegantly designed.

I bought both books and immediately started scribbling in the first one. My bad handwriting would seem so out of place in the beautiful second book that I have not even started working in it yet. Maybe I will give it as a gift to someone with better penmanship.