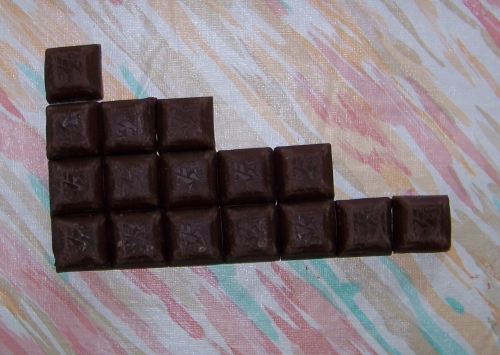 Mathematicians do not differentiate between these two versions since the strategy is almost the same in both cases. The classic game of Nim starts with four piles that have 1, 3, 5 and 7 matches. I call this configuration “classic” because it is how Nim was played in one of my favorite movies, “Last Year at Marienbad”. Recently that movie was rated Number One by Time Magazine in their list of the Top 10 Movies That Mess with Your Mind.

In the game of Chomp, also played by two people, there is a rectangular chocolate bar consisting of n by m squares, where the lowest left square is poisoned. Each player in turn chooses a particular square of the chocolate bar, and then eats this square as well as all the squares to the right and above. The player who eats the poisonous square loses.

Here is my Nim-Chomp game. It is the game of Nim with an extra condition: the piles are numbered. With every move a player is allowed to take any number of matches from any pile, with one constraint: after each turn the i-th pile can’t have fewer matches than the j-th pile if i is bigger than j.

The game of Nim is easy and its strategy has been known for many years. On the other hand, the game of Chomp is very difficult. The strategy is only known for 2 by m bars. So I invented the game of Nim-Chomp as a bridge between Nim and Chomp.