In a Turing test a human judge on one end of an interface interacts with either a computer or another human through this interface. If the judge can’t differentiate a machine from a human, then the computer is said to pass the test. One big goal of folks working in Artificial Intelligence is to build a computer that, when subjected to this test, is indistinguishable from a human.

However, while some people are working hard trying to build programs that can pass as humans, other people are working hard inventing tests that can differentiate between humans and those programs. Such tests are sometimes called Reverse Turing tests. As computer science progresses, the programs that are pretending to be humans as well as reverse tests are becoming increasingly complex.

For example, banks frequently want to prevent malicious computer programs from trying to log into their customers’ accounts. As a nice touch the judges are computers in this case. There are different methods designed to confirm that a human is trying to log in. In one of them a picture of a word, called CAPTCHA is presented on a screen, and the program requires that this word be typed in.

I wanted a CAPTCHA with words “Turing Test” in it for this posting. I looked online trying to find a way to do it. I couldn’t. There is a ton of software that can produce random CAPTCHAs from a dictionary but nothing could do a particular word. Finally, rather than looking for software, I found a human, a kind gentlemen named Leonid Grinberg who with some GIMP help manually implemented a self-referencing ” symbolizing the race between computers and tests. 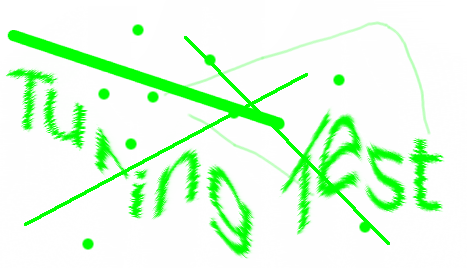 As text recognition software becomes better and better, these CAPTCHAs become more and more difficult to read by a human. The last time I tried to login, I was only able to type the right word on my fourth try. Very soon computers will be better than humans at parsing CAPTCHAs. Humans are loosing the race on visual methods like this one.

The standard safety recommendation is to avoid writing out the full and exact email address. Here’s an example: billgates AT gmail DOT com. Actually, I think computers are so smart nowadays that they can learn this trick. Another idea is to show a picture of your email address instead of using characters. Here we return to the image idea, which most computers can nowadays recognize.

Another idea of how to hide an email address is to give simple clues, which point to characters in the email address. For example, if you have “4” in your address, you might say that the character is the sum of two and two. I already invented a version of my email address in which each letter of my username is an answer to a simple question. Unfortunately, I think that the question answering systems like Start, as well as its huge new competitor Wolfram Alpha, will learn to answer these questions very soon. I can construct more sophisticated questions, but that would require my readers to spend more time to figure it out including going back to school for a calculus class.

So, recently, I’ve come up with a new idea. I made the description of my email simpler, but the paragraph describing my email didn’t contain all the necessary information:

I have an email account with Yahoo. My account name consists of seven lower case letters: five letters of my first name concatenated with the first two letters of my last name.

People who want to contact me can easily find my name in the title of my webpage or in my url, but I hoped it would take the evil computers some time to figure out what to look for, where it’s located and how to turn it into an address.

The day after I changed my contact web page, I went to my math coaching work at AMSA. During my break, I wanted to unwind by solving a light up puzzle, but it appeared that the new security system at AMSA forbids Internet access to all gaming sites. Thus, being still wound up I decided to do some work and went to my personal page for some materials. I was blocked again. The software politely informed me that access to personal websites was not permitted either. Oops. If a computer can understand that it is a personal website, it probably can figure out the name of the corresponding person. Oops-Oops-Oops. I am loosing the race against computers again. My recent idea to protect my email address from spam lasted one day until my first reality check.