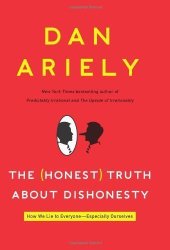 I had a distant relative Alla, who was brought up by a single mother, who died in a car crash when the girl was in her early teens. Alla was becoming a sweet and pleasant teenager; she was taken in by her aunt after the accident. Very soon the aunt started complaining that Alla was turning into a cheater and a thief. The aunt found a therapist for Alla, who explained that Alla was stealing for a reason. Because the world had unfairly stolen her mother, Alla felt entitled to compensation in the form of jewelry, money, and other luxuries.

I was reminded of Alla’s story when I was reading The (Honest) Truth About Dishonesty: How We Lie to Everyone—Especially Ourselves by Dan Ariely. Ariely discusses a wide range of reasons why honest people cheat. But to me he neglects to look at the most prominent reason. Often honest people cheat when they feel justified and entitled to do so.

One of Ariely’s experiments went like this. One group was asked to write a text avoiding letters x and z. The other group was asked to write a text avoiding letters a and n. The second task is way more difficult and requires more energy. After the tasks were completed the participants were given a test in which they had a chance to cheat. For this experiment, the participants were compensated financially according to the number of questions they solved. Not surprisingly, the second group cheated more. The book concludes that when people are tired, their guard goes down and they cheat more. I do not argue with this conclusion, but I think another reason also contributes to cheating. Have you ever tried to write a text without using the letters a and n? I did:

I should try it here. But this is so difficult. I give up.

My son, Alexey, was way better than me:

First, God brought forth the sky with the world. The world existed without form. Gloom covered the deep. The Spirit of God hovered over the fluids. Quoth God: let there be light. Thus light existed.

Fun as it is, this is cruel and unusual punishment. The request is more difficult than most people expect at an experiment. It could be that participants cheated not only because their capacity for honesty was depleted, but because they felt entitled to more money because the challenge was so difficult.

In another experiment, the participants received a high-fashion brand of sunglasses before the test. Some of them were told that the sunglasses were a cheap imitation of the luxury brand (when they really were not). This group cheated more than the group who thought that they got a real thing. The book concludes that wearing fake sunglasses makes people feel that they themselves are fake and so they care less about their honor. Unfortunately, the book doesn’t explain in detail what was actually promised. It looks like the participants were promised high-fashion sunglasses. In this case, the fake group would have felt deceived and might have felt more justified to cheat.

Dear Dan Ariely: May I suggest the following experiment. Invite people and promise them some money for a 15-minute task. Pay them the promised minimum and give them a test through which they can earn more. Construct it so that they can earn a lot more if they cheat. Then make the non-control group wait for half an hour. If I were in this group, I would have felt that I am owed for the total of 45 minutes—three times more than what I was promised. I do not know if I would cheat or just leave, but I wouldn’t be surprised that in this group people would cheat more than in the control group.