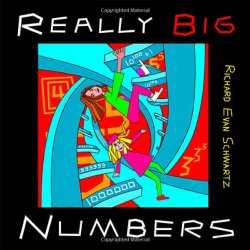 I received a book Really Big Numbers by Richard Schwartz for review. I was supposed to write the review a long time ago, but I’ve been procrastinating. Usually, if I like a book, I write a review very fast. If I hate a book, I do not write a review at all. With this book I developed a love-hate relationship.

Let me start with love. I enjoyed reading the first 80 pages. The pictures are great, and some explanations are very well thought out. Plus, I haven’t thought much about really big numbers, so the book helped me understand them. I was impressed with how this book treats very difficult ideas with simple explanations and illuminating images. I was captivated by it.

Now to hate. I had two problems with this book: one pedagogical and the other mathematical.

The pedagogical issue. The beginning of the book is suitable for small children. Most of the book is suitable for advanced middle-schoolers who like mathematics. The last part is very advanced. Is it a good idea to show children a book that looks like a children’s book, but which soon becomes totally out of their reach? Richard Schwartz understands it and says many times that pieces of this book might be read several years apart. Several years? What child is ready to wait several years to finish a book? How would children feel about the book and about numbers when no matter how hard they try, they cannot understand the end of the book?

As a reviewer, I can’t recommend the full book for kids who are not ready to grasp the notion of the Ackermann function or arrow notation. Even if the child is capable of understanding these ideas, there are mathematical issues that would prevent me from recommending it.

What bothers me is why a square? Why not a triangle? If we adopt this scheme, what is the meaning of a number in a triangle? Let’s try to unravel this. Following Richard Schwartz’s notation we get that n inside a square is the same as 10 inside n nested triangles. What do we do n times with 10 to get to 1 plexed n times? 1-plexed n times is 10 plexed n-1 times. There is a disconnect in notation here. For example, 10 in two nested triangles should mean 2 inside a square that is 1010. 10 inside one triangle should mean 1 inside a square which is 10. This doesn’t make any sense.

Even though the first 83 pages are delightful and the pictures are terrific, the notation doesn’t work. What a pity.