I mentor three PRIMES projects. One of them, with Joshua Xiong from Acton-Boxborough Regional High School, is devoted to impartial combinatorial games. We recently found a connection between these games and cellular automata. But first I need to remind you of the rules of Nim.

In the game of Nim there are several piles with counters. Two players take turns choosing a pile and removing several counters from it. A player loses when he or she who doesn’t have a turn. Nim is the most famous impartial combinatorial game and its strategy is well known. To win, you need to finish your move in a so called P-position. Nim P-positions are easy to calculate: Bitwise XOR the number of counters in all the piles, and if the result is zero then it’s a P-position. 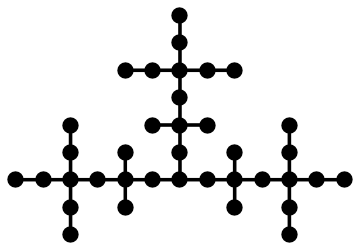 The first picture shows the automaton after 6 generations. The automaton consists of cells that never die and it grows like this: start with a square on a square grid. In the next generation the squares that share exactly one side with the living squares are born. At the end remove the Southern branch.

Everything fell into place. We immediately realized that the language of the automata gives us the right words to describe what we know about the game of Nim.

The parent-child relationship in the game of Nim is especially easy to explain. A P-position P1 is a parent of a P-position P2 if P1 differs from P2 in exactly two piles and it has one fewer counter in each of these piles. For example, a P-position (1,3,5,7) has six parents, one of them is (1,3,4,6). In the game with thee piles a P-position always has exactly one parent.

A position in the game of Nim with three piles is naturally depicted as a triple of numbers, that is as a point in 3D. The picture below shows the Nim automaton in 3D at generation 6. 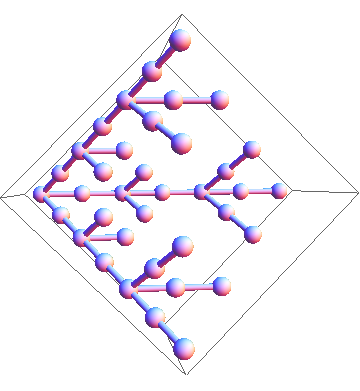 Our paper, Nim Fractals, about sequences enumerating P-positions and describing the automaton connection in more detail is posted at the arXiv:1405.5942. We give a different, but equivalent definition of a parent-child relationship there. A P-position P1 is a parent of P2 if there exists an optimal game such that P1 is achieved from P2 in exactly two moves in a game which takes the longest number of possible moves.