Ode to My Digital Scale

I valued my previous analog scale: I brought it from Europe and it showed my weight in kilograms.

I don’t remember why, a year ago, I decided to buy a digital scale: after all, my old scale is still functioning. But my new digital scale became an important instrument in my weight loss program.

Now I understand how my old scale and my lazy nature played tricks on my mind. For example, let’s say I decide that as soon as I reach one hundred kilograms (220 pounds), I would do something about it. Some time passes, I step on the scale, and it shows 100 kilograms — and maybe more. Is it more or not quite? If I lean to the right, it looks lower. The scale is not precise. So, I step back and adjust the scale at zero a little bit, to make sure it is not more than zero, but it actually could be slightly less. So I have reached my limit, but the scale’s imprecision allows me to pretend that there is a chance I am not over 100 kilograms, and thus do not have to do anything. More time passes, the scale shows 103 kilograms. I realize that I have been deceiving myself, but then it is too late for a fast fix that would lower my weight below 100. So I push the limit, and decide to wait until 105 kilograms.

My digital scale erased any ambiguity. The scale, however, has its own doubts. When I stand on it, the display flips between two numbers for a while. One of the numbers means no dinner tonight. But at the end the scale calls it: it spits out the final number with a beep. I had already decided that the scale is the boss. The flipping is irrelevant; the decision is irrevocable. If it means no dinner, so be it. 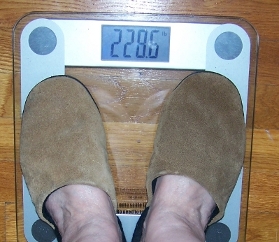 My new scale prevents inaction. It also allowed me to design my new plan: my Yellow Road. In this plan, my target weight decreases by 0.1 pounds per day. My behavior depends on my real weight with respect to my target weight. A small difference changes my behavior. So precision is essential.

As you can see in the picture the plan continues to work. I’ve lost 16 pounds since the start of the plan. Actually, I’ve lost 18 pounds, if I weigh myself without the camera.