Many years ago at Gelfand’s seminar in Moscow, USSR, someone pointed out a young girl and told me: “This is Natalia Grinberg. In her year in the math Olympiads, she was the best in the country. She is the next you.”

We were never introduced to each other and our paths never crossed until very recently.

Several years ago I became interested in the fate of the girls of the IMO (International Math Olympiad). So, I remembered Natalia and started looking for her. If she was the best in the USSR in her year, she would have been a gold medalist at the IMO. But I couldn’t find her in the records! The only Grinberg I found was Darij Grinberg from Germany who went to the IMO three times (2004, 2005, and 2006) and won two silver medals and one gold.

That was clearly not Natalia. I started doubting my memory and forgot about the whole story. Later I met Darij at MIT and someone told me that he was Natalia’s son.

I was really excited when I received an email from Natalia commenting on one of my blog posts. We immediately connected, and I asked her about past events.

Natalia participated in the All-Soviet Math Olympiads three times. In 1979 as an 8th grader she won a silver medal, and in 1980 and 1981 she won gold. That indeed was by far the best result in her year. So she was invited to join the IMO team.

That year the IMO was being held in the USA, which made Soviet authorities very nervous. At the very last moment four members of the team did not get permission to travel abroad. Natalia was one of them. The picture below, which Natalia sent to me, was taken during the Soviet training camp before the Olympiad. These four students were not allowed to travel to the IMO: Natalia Grinberg, Taras Malanyuk, Misha Epiktetov, and Lenya Lapshin. 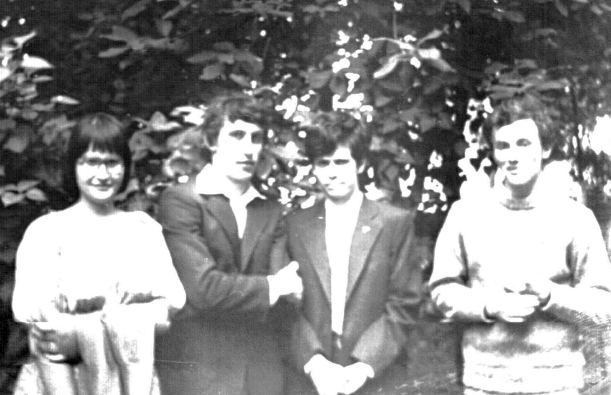 Because of the authorities’ paranoia, the Soviet team wasn’t full-sized. The team originally contained eight people, but as they rejected four, only six traveled to the USA, including two alternates.

I have written before how at that time the only way for a Jewish student to get to study mathematics at Moscow State University was to get to the IMO. I wrote a story about my friend Sasha Reznikov who trained himself to get to the IMO, but because of some official machinations, still was not accepted at MSU.

Natalia became a rare exception to the rule that the only way for a Jewish person to attend MSU was to participate in the IMO. It was a crack in the system. They had to block visas at the last moment, so that people wouldn’t have time to make a fuss and do something about it. Natalia slipped through the crack and got to study at the best university in the Soviet Union.

Unfortunately, the world lost another gold IMO girl. Three Soviet team members won gold medals that year. Natalia, being better then all of them, would have also won the gold medal.