The most difficult puzzle I wrote for the MIT Mystery Hunt 2013 was Turnary Reasoning. I can’t take credit for the difficulty: I designed the checkers positions; they were expectedly the easiest. Timothy Chow created the chess positions, and Alan Deckelbaum created the MTG positions. As the name of the puzzle suggests, you need to find whose turn it is in each position or, as the flavor text suggests, decide that the position is impossible.

I tried to solve the chess positions myself and was charmed by their beauty. The most difficult one was the first chess puzzle presented below. Find whose turn it is or prove that the position is impossible. 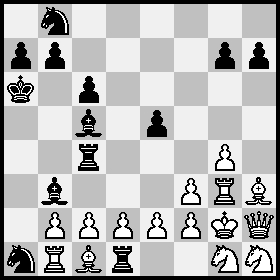