A Measure of Central Symmetry 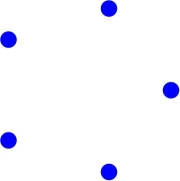 The measure of symmetry is positive. But how close to 0 can it be? The picture on the left is a shape that consists of five small disks located at the vertices of a regular pentagon. If the disks are small enough than the largest symmetric subshape consists of two disks. Thus the measure of symmetry for this shape is 2/5. If we replace a pentagon with a regular polygon with a large odd number of sides, we can get very close to 0.

After I started writing this I discovered that there are many ways in which people define measures of symmetry. The one I have defined here is called Kovner-Besicovitch measure. The good news is that the triangle is the least symmetric planar convex shape with respect to all of these different measures.