To digress. You might have heard the most famous Microsoft interview question: Why are manhole covers round? Presumably because round manhole covers can’t fall into slightly smaller round holes. The same property is true for manhole covers of any shape of constant width. On the picture below (Flickr original) you can see Reuleaux-triangle-shaped covers. 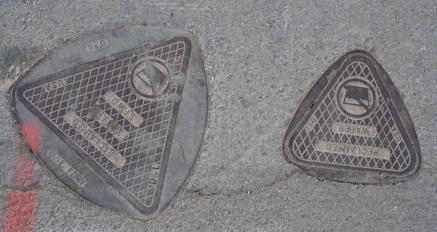 Let’s move the dimensions up. Dan’s questions become both more difficult and more interesting, because the shadows are not as simple as segments any more.

Before continuing, I need to introduce the concept of “Minkowski sums.” Suppose we have two convex bodies in space. Let’s designate the origin. Then a body can be represented as a set of vectors from the origin to the points in the body. The Minkowski sum of two bodies are all possible sums of two vectors corresponding to the first body and the second body.

In my paper co-authored with Christina Chen and Daniel Klain “Volume bounds for shadow covering”, we found the following connection between hiding inside and volumes. If L is a simplex, and K can hide behind it, but can’t hide inside L, then there exists t such that the Minkowski interpolation tK + (1-t)L has a larger volume than the volume of L. 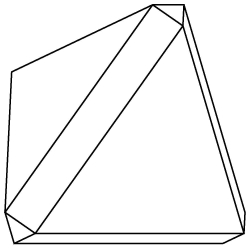 The main result of the paper is a universal constant bound: if K can hide behind L, then V(K) ≤ 2.942 V(L), independent of the dimension of the ambient space.