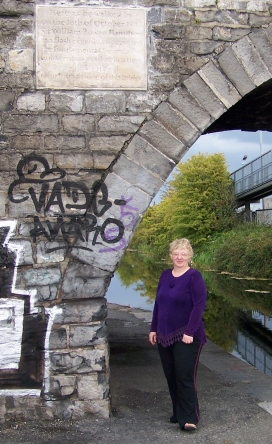 In August I visited my son Alexey Radul, who currently works at the Hamilton Institute in Maynooth, Ireland. One of the greatest Irish attractions, Broom Bridge, is located there. It’s a bridge over the railroad that connects Maynooth and Dublin. One day in 1843, while walking over the bridge, Sir William Rowan Hamilton had a revelation. He understood how the formulae for quaternions should be written. He scratched them into a stone of the bridge. Now the bridge has a plaque commemorating this event. The plaque contains his formulae. I don’t remember ever seeing a plaque with math, so naturally I rushed off to make my pilgrimage to Broom Bridge.

Quaternions have very pronounced sentimental value for me, since my first research was related to them. Let’s consider a simple graph. We can construct an algebra associated with this graph in the following way. For each vertex we have a generator of the algebra. In addition we have some relations. Each generator squared is equal to −1. If two vertices are connected the corresponding generators anti-commute, and they commute otherwise. The simplest non-commutative algebra associated with a graph corresponds to a graph with two vertices and one edge. If we call the generators i and j, then the we get the relations: i2 = j2 = −1, and ij = −ji. I we denote ij as k, the algebra as a vector space has dimension 4 and a basis: 1, i, j, k. These are exactly the quaternions. In my undergraduate research I studied such algebras related to Dynkin diagrams. Thirty years later I came back to them in my paper Clifford Algebras and Graphs. But I digress.

I was walking on the bridge hoping that like Hamilton I would come up with a new formula. Instead, I was looking around wondering why the Broombridge Station didn’t have a ticket office. I already had my ticket, but I was curious how other people would get theirs. I asked a girl standing on the platform where to buy tickets. She said that there is no way to buy tickets there, so she sometimes rides without a ticket. The fine for not having tickets is very high in Ireland, so I expressed my surprised. She told me that she just says that she is from the town of Broombridge if she is asked to present her ticket.

Being a Russian I started scheming: obviously people can save money by buying tickets to Broombridge and continuing without a ticket wherever they need to go. If the tickets are checked, they can claim that they are traveling from Broombridge. Clearly Ireland hasn’t been blessed with very many Russians visitors.