As you might have guessed from the title, this essay is about domino tilings.

Suppose a subset of a square grid has area N, and the number of possible domino tilings is T. Let’s imagine that each cell is contributing a factor of x tilings to the total independently of the others. Then we get that xN = T. This mental exercise suggests a definition: we call the nth root of T the degree of freedom per square for a given region.

You might expect that squares should give larger degrees of freedom than rectangles of the same area. The degree of freedom for a large square is about 1.3385. You can find more information in the beautiful paper Tilings by Federico Ardila and Richard P. Stanley. 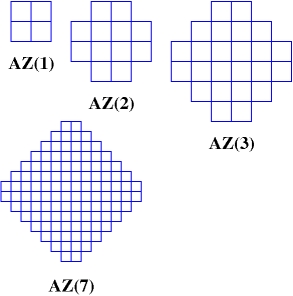 Let’s move from rectangles to Aztec diamonds. They are almost like squares but the side of the diamond is aligned with diagonals of the dominoes rather than with their sides. See the sample diamonds in the picture above, which Richard Stanley kindly sent to me for this essay.

It is easier to calculate the degree of freedom for Aztec diamonds than for regular squares. The degree is the fourth root of 2, or 1.1892…. In the picture below created by James Propp’s tiling group you can see a random tiling of a large Aztec diamond.

Back to freedom. As you can see from the picture, freedom is highly non-uniform and depends on where you live. Freedom is concentrated inside a circle called the arctic circle, perhaps because the areas outside it are frozen for lack of freedom.

Now I would like to expand the notion of freedom to give each cell its own freedom. For a large Aztec diamond, I will approximate freedom with a function that is one outside the arctic circle and is uniform inside. The Aztec diamond AZ(n) consists of 2n(n+1) squares, shaped like a square with side-length n√2. So the area of the circle is πn2/2. Hence we can calculate the freedom inside the circle as the πth root of 2, which is about 1.247. This number is still much less than the degree of freedom of a cell in a large square.