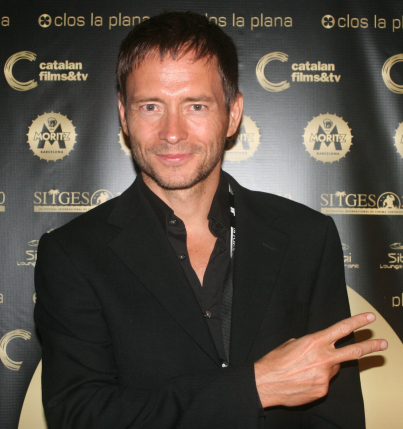 The movie created a controversy when Mathematical Sciences Research Institute (MSRI) withdrew its sponsorship for the first screening after a lot of objections based on the trailer. My interest was piqued by a painting that dominated the visual of the trailer’s erotica scene. The black and white amateur painting is of the integral sign with Russian letters stylized as math symbols that spell the word “Truth”. In addition, the name of the woman in the movie, Mariko, means “truth” in Japanese. Though it felt pretentious, I was hoping that the movie would be symbolic. When I heard that the actors do not talk in the movie, my expectations of symbolism grew. I love movies that are open to interpretation. So I bought the movie, watched it and wrote the following review. Before getting to the review itself I would like to thank Ed Frenkel for sending me the photos and giving me permission to use them in my frank assessment of his work.

Here is the plot:

There is much about the film that I like, including the slow pace and the visuals, with their minimalistic background and palette of black, white and red. The camera work is superb.

I welcomed the idea of a Love formula, because mathematics is ready to broaden the scope of its models, including venturing into love. Of course, some mathematical models of relationships already exist. 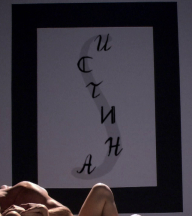 It’s great that the mathematician is portrayed against the stereotype: he’s neither introverted nor asexual. Unfortunately, the movie plays into other stereotypes of male mathematicians — being creepy and demanding sacrifices from their wives in the name of mathematics. As I mentioned, I was looking forward to the movie, hoping that it would encourage the imagination of viewers in their interpretations. To my disappointment, every scene in the movie is preceded by text that describes the plot, removing any flexibility of interpretation. Besides that, the emotions portrayed didn’t quite match the written plot, in no small part because Ed Frenkel is not a good actor.

The idea of preserving a formula by tattooing it on someone is beyond strange. He could have used a safe-deposit box. Or put the formula in an envelope and given it to the lover to keep, or just encrypted it, etc. With narcissistic lack of consciousness, the Mathematician seems unaware of the implications of his action of imprinting this dangerous secret on Mariko. She can never go swimming, or go to the gym, or be intimate with anyone else. Moreover, if the bad guys discover that Mariko is the Mathematician’s lover, her life will be in grave danger. Not to mention that tattooing is painful.

Something that could have been interesting and watchable in a historic movie, in this contemporary movie seems pointlessly cruel, dehumanizing and senseless.

I know for sure that Ed Frenkel is not stupid, so what are his reasons for constructing the plot in this way? Before investigating his reasons, I have a mathematical complaint about the movie. Every mathematician and teacher knows that when asserting a formula you need to indicate its interpretation: what its symbols refer to in the real world. For example, suppose I tell you my own great Formula of Love: Cn = (2n)!/(n+1)!n!. You may recognize Cn as the Catalan numbers, but what does this have to do with Love? To give the formula meaning I need to tell you that Cn is the number of ways you can seat n loving couples at a round table with 2n chairs, so that each couple can join hands (assuming the arms are long enough to reach across the table) without any two pairs of arms crossing. Assigning an interpretation makes the Catalan numbers part of the world’s growing body of romantic research.

Writing a formula without mentioning what the variables mean fails to preserve it for the future. Ed Frenkel knows that. Wait a minute. The formula in the movie is actually not the Formula of Love, but a real formula from Ed’s paper on instantons. It’s right there, formula 5.7 on page 74. Every variable is explained in the paper. Ah-ha! So his movie isn’t actually about art, but rather about Ed’s formula. Indeed, there is no real Formula of Love. In such situations in other movies, they have simply shown fragments of a formula. However, in Rites of Love and Math, Frenkel’s formula — which has nothing to do with Love — is shot in full view, zooming in slowly. 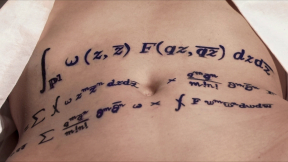 The movie is a commercial. Ed is using our fascination with sex to popularize his formula, and using his formula and his scientific standing to advertise his body.

I was so disappointed that the default interpretation of the movie was imposed on me by those pre-scene texts, that I decided to watch the movie for a second time, trying to ignore the text, hoping to find some new meaning.

If you decide to see the movie, you’ll probably come up with your own interpretation of the plot. I actually came up with several. I had a funny one and an allegorical one, but the most interesting task for me was to try create an interpretation matching the emotions portrayed:

Mariko knows that something is wrong in her sex life with the Mathematician. But she still loves him and writes him a love letter. The Mathematician comes to Mariko’s place. He is distant and cold. They cuddle. He explains to her that sex doesn’t bring him pleasure anymore and that moreover, he can’t even perform. He tells her that the only thing that brings him joy is mathematics and suggests that his sexual dysfunction and lack of pleasure will be fixed if they tattoo his favorite formula on her body. She agrees, but first they decide to give sex a last try. They try real hard. But he can’t relax and he doesn’t enjoy it, so she agrees to the tattoo. He does get excited during the tattooing process itself, but once he finishes his whole formula, he is no longer turned on. Mariko’s suffering has been in vain.