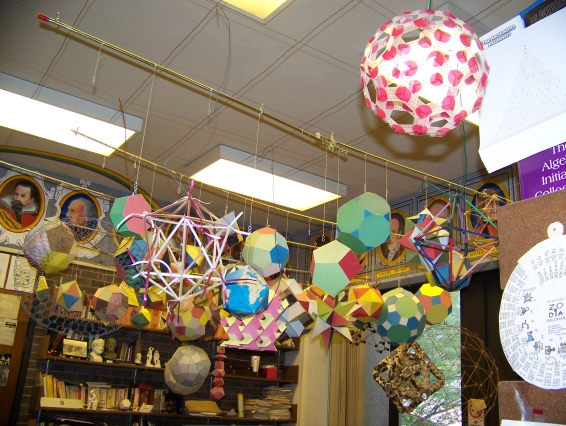 Visitors to the math department of Princeton University used to stop by John Conway’s office. Even if it were closed, they could peek through the window in the door to see the many beautiful, symmetric figures hanging in his office.

The figures, which John Conway had made, were there for 20 years. Just recently John received a letter informing him that his office had been inspected by the State Fire Marshall and that “those things hanging from your ceiling are against the State’s fire code and must be taken down.” The math department was worried about a possible fine.

So John threw away the “things.” I wanted to cry as I watched these huge garbage bags being taken away. I rescued several figures, but that was all that I could fit into my car. For 20 years no one complained, but now the bureaucracy has beat out beauty and mathematics.

This picture is the last view of the “hazardous” office.