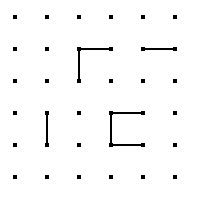 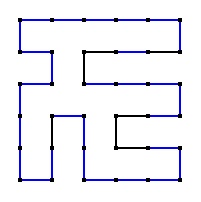 I love Grand Tour puzzles more than I love Sudoku. You are given a graph, for example, a square grid like the one on the left. Some edges are highlighted. You need to find a closed path that visits each vertex exactly once and includes the highlighted edges as part of the path. Mathematically speaking you need to reconstruct a Hamiltonian circuit on a graph, once you are given a part of it. The highlighted edges are chosen to guarantee a unique solution to the puzzle.

On the left you can see a sample grand tour problem with its solution. This puzzle was designed by Glenn Iba. On Glenn’s Grand Tour Puzzle Page you can find many grand tour puzzles of varying levels of difficulty. The puzzles are playable. That is, you can click or unclick an edge. You can also branch out in a different color, which is especially useful for difficult puzzles when you want to test a hypothesis. I just want to warn you: these puzzles are addictive — I couldn’t stop playing until I solved all of them.

Below there is a simple grand tour puzzle from Glenn’s collection, but this time on a triangular grid: 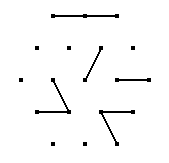 Below are the sequences associated with this puzzle. Except for one case, I do not know if these sequences are in the Online Encyclopedia for Integer Sequences. I don’t know because I only counted two terms of each sequence and this information is not sufficient to identify the sequence.

You can also make similar sequences for a triangular grid.

I invite you to calculate these sequences and submit them to the OEIS, if they are not already there.