The Symmetries of Things 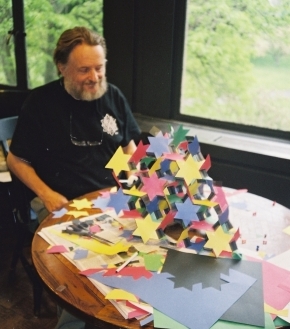 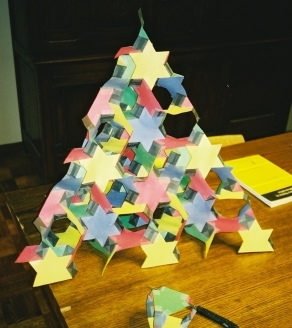 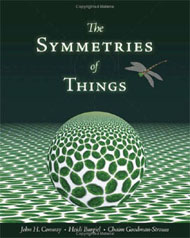 The Symmetries of Things

by John H. Conway, Heidi Burgiel, and Chaim Goodman-Strauss is out. It is a beautiful edition with great pictures.

The first chapter is very nicely written and might be recommended to high school and undergraduate students. It covers symmetries of finite and infinite 2D objects.

The second chapter adds color to the theory. For beautiful colorful pictures with symmetry, there are two symmetry groups: the group that preserves the picture while ignoring its coloring and the group that preserves the picture while respecting its coloring. The latter group is a subgroup of a former group. This second chapter discusses all possible ways to symmetrically color a symmetric 2D picture. The chapter then continues with a discussion of group theory. This chapter is much more difficult to read than the first chapter, as it uses a lot of notations. The pictures are still beautiful, though.

The third chapter is even more difficult to read and the notations become even heavier. This chapter discusses hyperbolic groups and symmetries of objects in the hyperbolic space. Then the chapter moves into 3D and 4D. I guess that some parts of the second and the third chapters are not meant for light reading; they should be considered more as reference materials.

Here are pictures of a musnub cube (multiplied snub cube), built by John H. Conway. It is an infinite Archimedean polyhedron. The description of it is on page 338 and the diagram is on page 339 of the book. This object was glued together from stars and squares. Each corner of the square is glued to a point of one star and to an inside corner of another star. Mathematically, a star is not a regular polygon. If you look at stars with your mathematical eye, each star in the picture is not just a star, but rather the union of a regular hexagon with 6 regular triangles. That means the list of the face sizes around each vertex of a musnub cube officially is represented as 6.3.4.3.3.

The second picture shows a finished musnub cube. You can’t really finish building an infinite structure. Right? It is finished in the sense that John Conway finished doing what he was planning to do: to construct a part of a musnub cube inside a regular triangular pyramid.