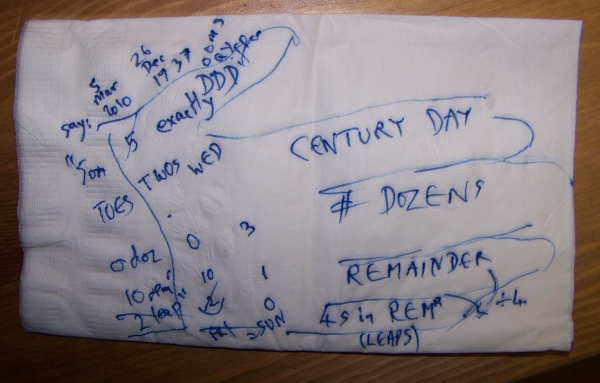 On March 5, 2010 I visited Princeton and had dinner with John Conway at Tiger Noodles. He gave me the second Doomsday lesson right there on a napkin. I described the first Doomsday lesson earlier, in which John taught me to calculate the days of the week for 2009. Now was the time to expand that lesson to any year.

As you can see on the photo of the napkin, John uses his fingers to make calculations. The thumb represents the DoomsDay Difference, the number of days your birthday is ahead of DoomsDay for a given year. To calculate this number you have to go back to my previous post.

The index finger represents the century adjustment. For example, the Doomsday for the year 1900 is Wednesday. Conway remembers Wednesday as We-are-in-this-day. He invented his algorithm in the twentieth century, not to mention that most people who use his algorithm were born in that century. Conway remembers the Doomsday for the year 2000 as Twosday.

The middle finger counts the number of dozens in the last two digits of your year. It is important to use “dozen” instead of “12” as later we will sum up all the numerals, and the word “dozen” will remind us that we do not need to include it in the sum.

John made two sample calculations on the napkin. The first one was for his own birthday — December 26, 1937. John was born exactly on Doomsday. I suspect that that is the real reason he called his algorithm the Doomsday Algorithm. The century adjustment is Wednesday. There are 3 dozens in 37, with the remainder 1 and 0 leap years in the remainder. When we add four more days to Wednesday, we get Sunday. So John Conway was born on Sunday.

The second napkin example was the day we had dinner: March 5, 2010. March 5 is 5 days ahead of the Doomsday. The century adjustment is Twosday, plus 0 dozens, 10 years in the remainder and 2 leap years in the remainder. 5 + 0 + 10 + 2 equals 3 modulo 7. Hence, we add three days to Tuesday, demonstrating that we dined out together on Friday. But then, we already knew that.